Part Two: The Ties that Bind

By Sonia Mountford. You can also view the story here.

In Part One, I looked at conflicts of interest in the relationship between Big Food, including companies such as Kellogg’s, and the Association for Dietetics in South Africa (ADSA).

ADSA has always maintained that there are no conflicts of interest, and that its association with Big Food is benign. Yet it accepts sponsorship from companies that make products implicated in causing worldwide epidemics of serious chronic diseases, including obesity, heart disease, cancer and diabetes, increasingly also dementia, that specialists are calling “type 3 diabetes”, because of its links with diet.

ADSA also maintains that it can change and influence Big Food nutrition attitudes and information from within. ADSA has even queried (on Twitter) that “The real question is: “Why should we not engage with Big Food?  Should we leave big food up to their own devices?”

At best, that can seem naive; at worst a cynical rationalisation for an unhealthy collaboration. Put another way, it’s a spin on the collaboration that lies at the heart of the ties between dietetic associations and Big Food worldwide, and growing global concern about the negative effects these ties have on people’s health.

Big question
However ADSA has not been able to answer the real Big question: Why is Big Food so interested in partnering with ADSA?

For Big Food, the rising obesity rates and non-communicable diseases (NCDs) present a complication, an uncomfortable PR challenge, since research implicates their products as the cause of many of our modern diseases. At the same time, Big Food has a duty to their shareholders to make money and work hard to sell more products, particularly to emerging markets.

Many unhealthy products are very profitable. Over the past decade sales of packaged foods around the world have jumped by 92%, to $2.2 trillion in 2014, the research outfit, Euromonitor estimated.

Big Food also know that their products would not be appealing without the amount of sugar they contain along with the other questionable additives, “flavourants” and salt.

“Their relentless drive to achieve the greatest allure for the lowest possible cost has drawn them, inexorably, to these three ingredients time and time again. The industry has boxed itself in.”

Health washing
So instead of making food healthier, Big Food has responded in other ways, for example, emphasising active lifestyles. Coca Cola is one of the most active here.

Big Food also finds ways to have their brand and products viewed in a favourable light by “health washing”, a tried-and-true industry tactic to make unhealthy foods seem nutritious.

One of those ways is to use dietitians and dietetic associations to promote these health-washed products. To do that, they need to make sure that their brand is perceived by RDs as promotion worthy, and the don’t mind spending a lot of money to achieve that aim.

As discussed in Part One, ADSA actively promote their sponsors to member RDs. So it should come as no surprise that many RDs suggest that highly processed **Kellogg’s products, such as the cereals and sport bars, can be called “healthy bars”.

Let’s look at the ingredients of the Special K bar, not to say that any of the other bars are any healthier but we are focusing on Kellogg’s since it is a  “Gold Sponsor” of the ADSA.

The sugar content alone is alarming, not to mention the fact that this is a highly processed product and includes artificial sweeteners. It also does not mention which ‘flavourings’ are used. You can certainly see why RDs credibility is at risk when they list products like these under  “healthy bars”. There’s not much about this product that is even real when it comes to “real food”, close to its natural state.

ADSA regularly maintains that promoting processed cereal bars with added sugar to sporty children as a source of energy is backed by science.

UNICEF’s The Facts for Life public consultation document states, “that if nutrition or health claims are to be made, they should not be selective in the information they provide. They must contain all relevant information, for example, about the content of what may be considered healthy ingredients, as well as unhealthy ingredients.

“For example, to suggest a food is a rich source of a nutrient, but not to mention that the food also contains excessive amounts of fats, or salt, or added sugar is misleading.”

Health by association
Another trick is to be viewed as being healthy by association, which is probably why Kellogg’s were one of the sponsors of the 2014 Nutritional Congress in Johannesburg, hosted by the Nutrition Society of South Africa (NSSA) and ADSA. 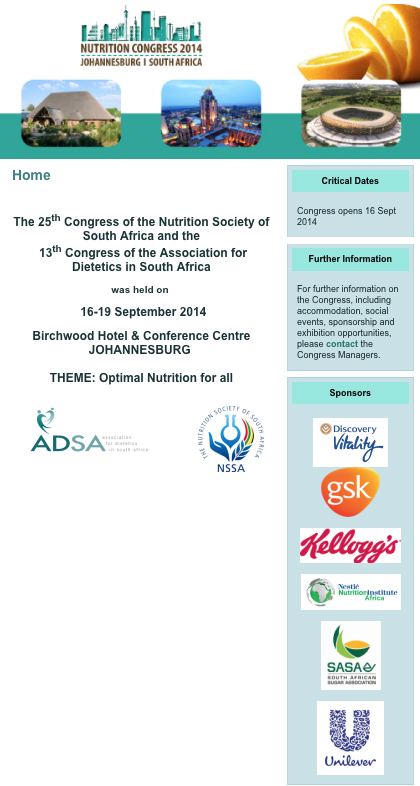 Kellogg’s also trained nearly 600 health care professionals in South Africa via their Kellogg’s Corn Flakes® nutrition education campaign. This is clearly a case of the fox watching the hen house. ADSA, of course, doesn’t see it that way. It’s favourable comment on the internal RDs portal was: “…Kellogg’s ran a very successful Nutrition Education campaign throughout clinics in Gauteng…”

Dietary guide
Kellogg’s have even gone so far as, “to provide access to the latest research, information and tools” via their website www.kelloggsnutrition.com launched in 2012 for health care professionals.

So do RDs and other health care professionals really have to look to Big Food for dietary guidance?

This is a perfect example of what the editorial PLoS Medicine Series on Big Food: The Food Industry Is Ripe for Scrutiny says on the topic: “The legitimization of food companies as global health experts is further fuelled by the growing number of private-public partnerships with public health organizations ,ostensibly designed to foster collaborative action to improve people’s health and wellbeing.

The editorial further states, “food companies are rebranding themselves as ‘‘nutrition companies’’, offering business acumen and knowledge in food science and distribution, and asserting authority over solutions to problems not just of food production but of malnutrition, obesity, and even poverty”.

Kellogg’s has clearly done well with their health and wellness ruse to make their foods “favourable” to South African RDs, although they spent millions of dollars and lobbied US Congress in 2011 to weaken the standards of the proposed voluntary principles to be used by industry as a guide for marketing food to children in the United States.

“To further demonstrate our commitment to health and nutrition, the Kellogg Company of South Africa has employed three dietitians to provide expertise in the field of nutrition to the company” — as taken from the ADSA website.

Does ADSA truly believe that they can influence Kellogg’s to improve the nutritional quality of their products to such a degree that it would make any real difference?

One thing that ADSA have been able to influence is ensuring Kellogg’s products are viewed as “favourable” amongst RDs and in turn South African consumers.

Perhaps it’s time for ADSA to realise that Kellogg’s and other Big Food companies producing unhealthy products, gave up on healthy food long ago, and instead see that their focus is on forging ahead with business as usual.

“Kellogg’s remains focused on its core categories, including cereal, snack and frozen foods, and it sees this focus as an advantage. Kellogg’s’ strategy in 2013 is to “remain a global cereal leader,” “become a global snacks player,” focus on frozen” and “increase focus on emerging markets” Kellogg Company, Our Value’s (2013).

As British investigative health journalist and author Jerome Burne puts it succinctly in a blog  on Cuddly dietitians in cosy embrace of industry fat cats: “Quite simply the industry is running rings round the dietitians and years of trying to get meaningful changes that would significantly improve the nation’s health have achieved very little,” in an article on a forensic analysis published  in February in the BMJ; Sugar: spinning a web of influence.), the true nature of the relationship between industry and nutritional experts.

Informed choices
Kellogg’s Social Funds Report states, “At Kellogg, we believe our role is to give consumers the information they need to make informed dietary choices for both themselves and their families. We also believe that all foods can have a place in the diet—with balance and moderation.”

The fact is that there are foods that should be avoided as they are simply not healthy, and scientists have long ago pinpointed the link between processed foods filled with salt and fat and food addiction.

A more recent Michigan University study published in PLOS ONE , titled Which Foods May Be Addictive? The Roles of Processing, Fat Content, and Glycemic Load is one of the first to examine specifically which foods may be implicated in “food addiction”. They found that highly processed foods were more likely to have the same effect on the brain as hard drugs, compared to non-processed foods like wheat, fish, and other “boring” and “healthy” foods.

The researchers further said that future research should examine whether addictive foods are capable of triggering changes in brain circuitry and behaviour like drugs of abuse.

Tongue tied?
It’s not only what RDs affiliated to ADSA say that needs to be looked at more closely, but also what they don’t say:  Are ADSA and RDs that are registered with them at liberty to make overt cautionary statements about processed foods and sugar or are they hampered through their ties that bind them to Big Food?

Would they support nutrition policies that might upset corporate sponsors, such as sugar taxes, GMO labeling or strong discouragement of processed foods?

Dr Marion Nestle, the Paulette Goddard Professor of Nutrition, Food Studies, and Public Health at New York University and author of Food Politics, believes that goals of food companies and health professionals are rarely compatible. She says, “Dietitians ought to be advising clients and the public about what to eat to stay healthy and prevent chronic disease. This necessarily means promoting consumption of some foods and discouraging consumption of others.”

She hits the nail on the healthy head when she says: “Dietitians cannot speak truth to clients and protect corporate sponsorship at the same time.”

Burne’s ending paragraph to his article sums up the predicament of ADSA perfectly.
“They are firmly and apparently inescapably wedged between a rock and a hard place – admitting they’d been wrong would mean turning on the industry that not only provides them with vital funding but is now firmly embedded in the whole regulatory process.
“It must certainly be uncomfortable for them, but it is deadly for many consumers.”

Helping you find integrity in the food chain soniam@eategrity.co.za